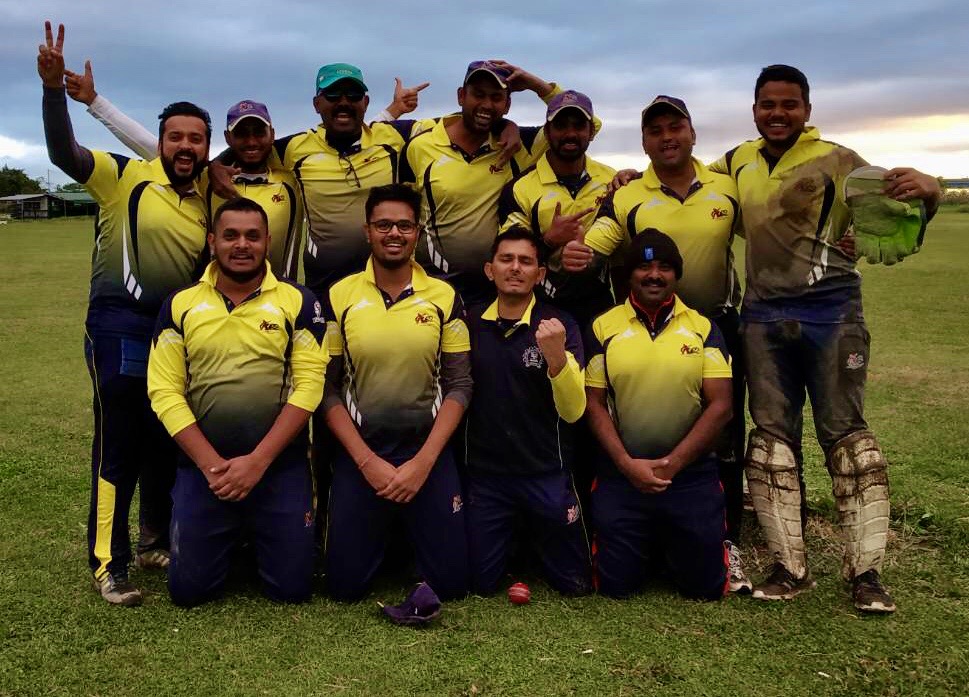 The 2019 season has finally ended on a good note despite a few challenges from typhoon. Here is the report for knockouts.

The Group B table topper Alpha Quashers took on the debutants Ebina CC in the first Semi Final game at Edogawa. The match had been reduced to 35 overs a side due to overnight rain. Ebina won the toss and invited Alpha Quashers to bat first. Good toss to win for Ebina as the outfield was on slower side due to wet conditions and was expected to improve in the later half. It was steady start from the Quashers openers Rohit Kumar and Vasanthan, putting on 59 runs for the first wicket but were later reduced to 106/5 (28 overs) by some good spin bowling from Ebina. However, a few quick runs from Nandha 29*(25) and Praveen 18(19) helped Quashers to push their total to 155/7 (35 overs) which is a decent score considering the conditions. Opener Rohit Kumar 36(64) top scored for the Quashers while Shakaf 27/3 and Ameen 31/2 were the pick of Ebina bowlers. 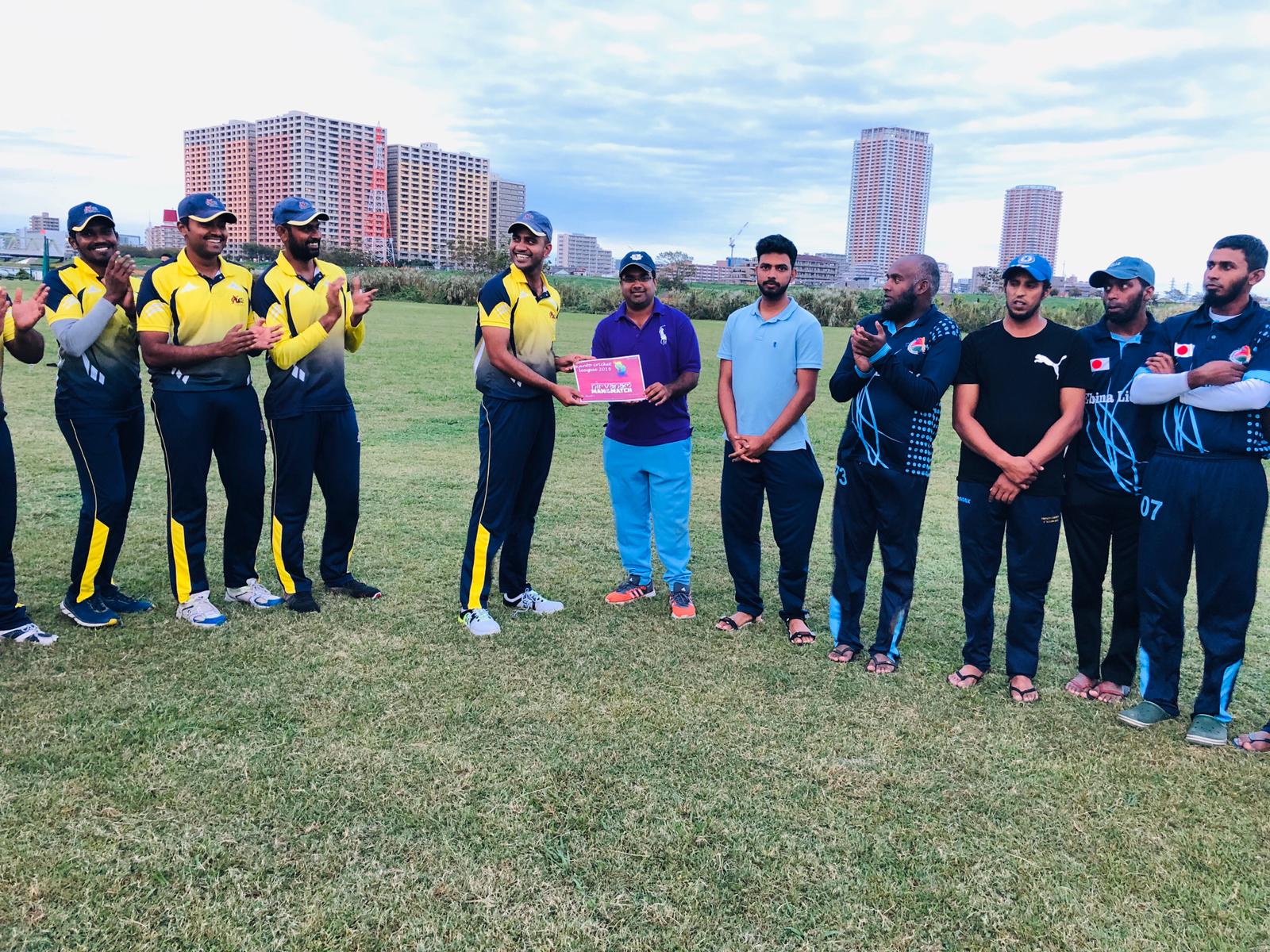 Nandha Received the Man of the Match

Quashers known for their relentless bowling lineup were a little depleted towards the end of the season with both their strike bowlers Gurman Singh & Nikhil Chajjed missing out due to injuries. But their bench strength is such that they were never short of the bowling options. Praveen and Nandha struck early blows to dismiss Ebina’s top 4 for 52 in 14 overs. Ebina made a good come back later through Nazir & Rimzad. Both batsmen scored freely with some good stroke play and stitched up a 50 run partnership. With only 50 more runs required from 11 overs with 6 wickets remaining and both set batsman in the middle, one would expect an easy win for Ebina. But this is when things took wrong turn for the debutants. Nandha removed Nazir 30(49) in the 24th over and a surprise introduction of Srinivasa at the other end brought an end to Rimzad 39(35) who top scored for Ebina. Srinivasa struck a double blow removing Ebina’s captain Shakaf in the same over and suddenly Ebina were staring at a defeat at 108/8 (25 overs). The tail enders showed some resistance but Praveen 22/4 brought an end to the innings. In the end Ebina fell short by 24 runs and Quashers were through to the Finals. Nandhakumar Rangasamy was presented with the Nirvanam MOM for his all around performance of 29 runs and 30/3

In the second Semi Final, Serendib couldn’t secure a team and conceded walkover to the group A table toppers, Pakistan Stars. 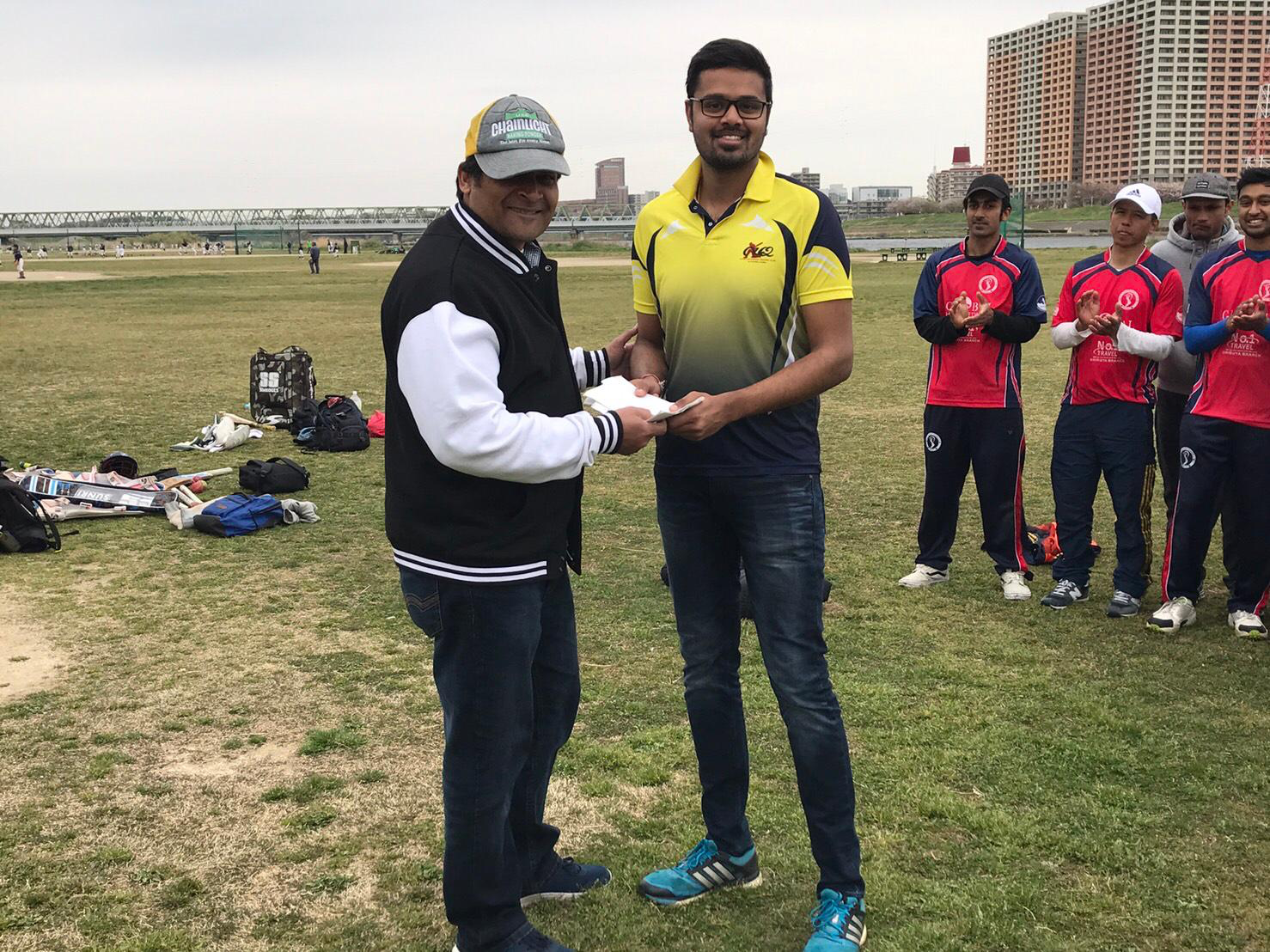 The forecast for the finals was cloudy and rainy, however the table toppers from both the KCL groups were determined to see through the season, despite both the teams were short of their main players. The Alpha Quashers spent more than an hour preparing the ground by collecting several dozens of buckets of water near the pitch area and drying the ground. Thanks to the umpire Shubham Shukla for assisting in the process too. The match was shortened to 25 overs, while the umpire also promptly reducing 2 overs for Pakistan Stars for their late arrival. The toss was won by the Pakistan Stars who choose to bowl first, an obvious decision considering the wet out-field.

Both the openers Rohit and Srinivasa looked all set from the beginning playing beautiful drives, but only to be prevented by the wet outfield from reaching the boundary. The bowlers Salman Khan and Shami bowled tight lines skidding the bowl through. One such skidded ball from Shami caught Srinivasa’s top-edge off an attempted pull. Rohit was joined by Vasanthan, with the pair adding some quick runs, however the partnership was short-lived with a deflection off the ball on to the stumps by the bowler – the unluckiest of the dismissals for Rohit Kumar. In came Rizwan bowling tight lines and picking up 4 wickets in the process. Gurman, Vasanthan, Yusry Mohideen, and Nirmal all fell in quick succession to Rizwan putting all the pressure back on the Alpha Quashers. A partnership was desperately needed for the batting team, and was duly produced by Nikhil continuing his explosive form, and Elankumaran, the find of the year for the Quashers. The partnership was well crafted with Elankumaran picking up singles almost off every ball, while Nikhil hitting the ball out of the park, at essential phases to keep the momentum on. The partnership took the Quashers to a decent score of 123 off 25 overs, with a few quick wickets falling at the last over while attempting to up the run-rate.

In response, both the Pakistan Stars openers Shami and Athar Shah came with an attacking mindset and was constantly seen hitting the ball over the in-field. With both the leading wicket-takers for Quashers (Bakkiyaraj and Praveen) unavailable, the spearheads Gurman and Nikhil stepped up to put brakes on the attacking openers. Nikhil eventually let a ball skid through to the stumps off Ather Shah breaking the partnership. The captain Rashid Rana occupied the crease well preventing anymore wickets at one end. However, Gurman used pressure at the other end to get the other opener Shami. Tight lines from Vasanthan and Karthik kept the Pakistan Stars under check. A steady partnership was being built by Rashid Rana and Mohamed Rizwan, taking the game away. At this point, the required run rate was well under control and with wickets in hand along with the veteran Rashid Rana’s guidance, it looked like Pakistan Stars would away with the coveted trophy. Just when Rashid Rana hit a six and was ready to be unshackled, Yusry Mohideen came to deal a double blow taking out both the batters in the same over. A couple more wickets fell in the next 3 overs to Nikhil, Vasanthan and Gurman effectively dealing the final blow to the Pakistan Stars. Yusry Mohideen became the top wicket taker for the Quashers by coming back in the final over to finish off the Pakistan Stars innings. In the end, it was a tight game which was won by Quashers by a 12 run margin.